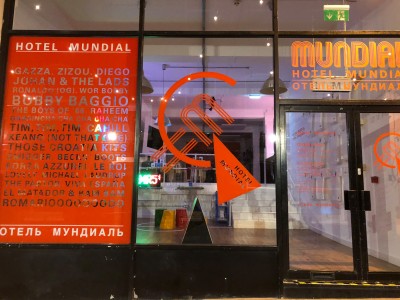 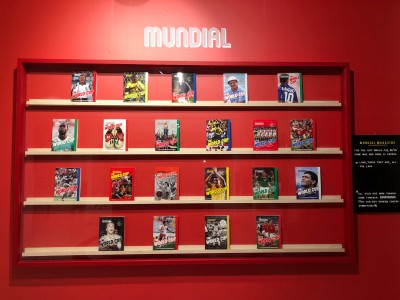 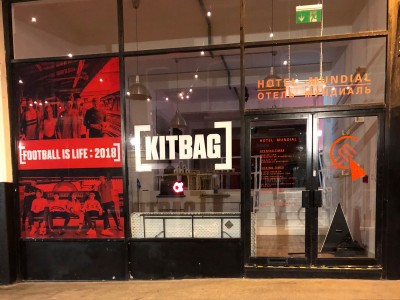 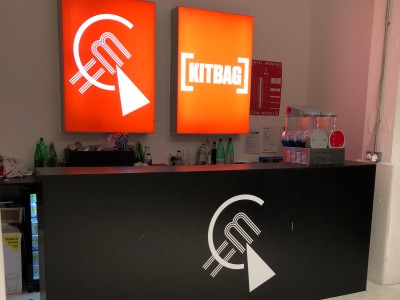 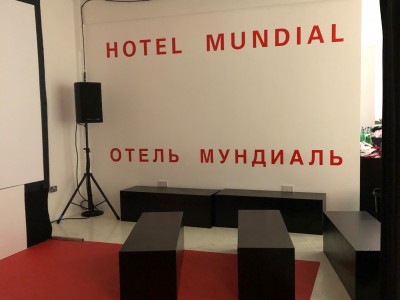 Based on Tom Usher’s original article in The Metro

Encapsulating the new breed of cultured footy fan is the Mundial magazine crowd. Originally launched as a one-off to celebrate the 2014 World Cup in Brazil, Mundial is now a quarterly ‘football lifestyle’ magazine, that according to its website deals with ‘fans, kits, photography, boots, nostalgia, goals, illustrations, pubs, and words’. It’s certainly struck a chord with the public, making it one of the most well followed football publications going.

As part of the 2018 World Cup celebrations LC partnered with Mundial Magazine to create a pop-up bar in Central London where fans could gather to watch the live games.

“We made Hotel Mundial because we wanted somewhere that was a proper, physical manifestation of what we try to do as a magazine,’ explains Sam Diss, commisioning editor of Mundial, appropriately dressed in the latest Japan national team shirt. ‘We wanted to make a cool and discerning place in the heart of London, that wasn’t a pain in the arse to watch a game in, and one full of nice stuff celebrating football in all its guises, in fashion, in writing, in music, in beer, and on the pitch.”

And it certainly felt like a little footballing haven, like what I imagine a nursery would be like for football fans, somewhere you could leave them for a few hours whilst you went and did some shopping. As you step in, the first wall to your right is covered with national team shirts looking resplendent in a huge amount of natural light, which kind of sets the tone for the whole space. There are neat looking stands selling some expensive and some not so expensive merchandise: magazines, badges, stickers, scarfs, hats and obviously shirts.

There is an aesthetically pleasing back wall of magazine covers, all arranged in pristine condition in glass container. There is obviously a Playstation to play the latest FIFA game, or in my case get thrashed at the latest FIFA game (I haven’t played footy games since the one true version which everyone knows is Pro Evo on Playstation 2). There are happy hours, serving two beers for a fiver, there is a slush machine, selling lemon or lime slush puppies with shots of spirits in (the rum and lime slush is the one). There is a giant telly to watch the games on. There are loads of people peacocking in their most obscure retro shirt, having a chat about footy, or mostly just shouting at the giant telly.

‘It’s a space for football fans, designed by football fans, staffed by football fans,’ says Sam. ‘If you want somewhere that’s proper aggro where you can throw pints at each other, that’s cool, but you can go somewhere else for that: we’re for people who want to chat about football, have a few slushies, and watch the game. ‘Don’t get me wrong, everyone loses themselves when their team scores, and the atmosphere has been class, but it’s an inclusive space that doesn’t have the intimidation factor that can come with other big venues.’

I was there, five to ten slushies down, watching the Brazil v Serbia game, which I basically didn’t care about at all bar seeing what madness Neymar Jr would get up to, and I can vouch for the fact that it was a convivial place, full of people who just seemed to care about football, even to the point of kind of nerding out about it. Sure, when I want to get a few Kronenbourgs in and get a bit lively I’d probably go to my local, but it was nice to have a space where I could also just be a footy geek for a bit without any judgement.

“We love working with Mundial whether it is producing the magazine that continues to go from strength to strength, or events like this which have set a new benchmark for live spectator entertainment. It’s a tremendous challenge to create a themed pop-up space where people can both spend a lot of time and enjoy a real genuine atmosphere. We’re tremendously proud to have been part of this project for Mundial.“
Greig Scott, Managing Director Logical Connections